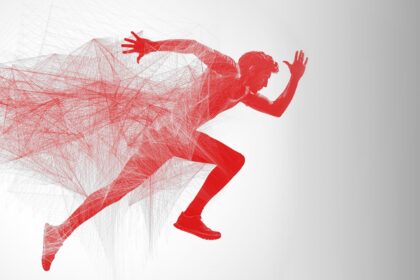 ​It’s the first game of your season, the first official time putting on your team colors this year. You’re looking great and feeling even better because you just spent the entire off season preparing for this moment. All of the hard work put into sharpening your skill set and building the strength to perform at your best is about to pay off. During the beginning of the season you’re as strong as you’ve ever been, you have a quicker burst speeding past a defender and the ability to out jump everyone. Nothing can stop you. A month into the season, you start to feel like you don’t have as much spring to your step and towards the end of the season it starts feeling like you have weights in your shoes. Why does this happen?

Qualities such as strength and aerobic endurance (long duration exercise) last about a month compared to strength endurance (endurance of more explosive movements) which lasts around 2 weeks, and maximal speed is only held onto for less than a week following training. Since these qualities aren’t fully trained from playing a sport itself, they are lost throughout a season. However, correct and effective strength training within your season can actually prevent the loss of these qualities.

In-Season and Off-Season Training
Volume:
During off season strength training, training volume (sets x reps) is generally higher compared to in season because you aren’t devoting as much time towards practices and competitions, so the body is able to withstand higher workloads without causing a decrease in performance. When the season rolls around, more of a priority is placed on sporting movements. Volume during season decreases because not as many strength movements are needed. This allows more time for pre-habilitation and regeneration exercises to counter act common injuries that are seen in a particular sport. Overuse injuries happen from performing the same movement pattern too often, causing these muscles to get strong and overdeveloped. If the muscles that oppose the sporting motion aren’t trained, the chance of creating an injury from overuse is high. Example: A volleyball player gets pain in her upper back from continuously hitting the ball. She does not train with any exercises to help create strength or counteract the overuse of hitting the ball. Performance declines.

Exercise Selection:
Exercise selection for in-season training changes also to accommodate the athlete’s sport. Every exercise is evaluated for its risk and reward. To get the most benefit from training, exercises should be modified to make sure extra stress isn’t added in when it’s not needed. A front squat, for example, can cause unwanted stress on wrists and elbows from holding a front rack position with a bar. For athletes in sports such as baseball, hockey, and tennis, to name a few, this would be counterproductive since healthy wrists and elbows are important to play at a high level. Instead, this can be changed to a goblet squat or back squat to still be able to perform this foundational exercise without it affecting sporting movements. For sports like cross country, where single leg strength is imperative, a front squat could also be changed to a single leg squat to build sport-specific lower body strength.

Program Auto-Regulation:
An in-season training program should also be tailored to how the athlete is feeling in the moment. Not all practices and games are alike throughout the season. Some are very grueling and some are more relaxed. The volume in programs can be changed based on how fresh the athlete is for that session. If they’re feeling great and practices haven’t been very physically demanding, more volume can be tolerated to create more strength or power gains, or scaled back to allow for more recovery.

Soreness:
Often times, when we resistance train, we feel sore after words. There are a few things we do when we workout that can cause this:

​​Strength training plays an extremely important role in reducing injuries and increasing strength, power, and endurance. While you may think to just maintain these qualities during a season, it’s realistic to be able to make gains during the competitive season. We can also do this without creating soreness so that you will able to feel prepared for every competition. Exercise selection and volume can be manipulated in any way to properly tailor to the sport, position, and frequency of competitions. You just spent months building your body up for peak performance, why lose it all after a couple weeks into the season just because you couldn’t fit in an hour a week to train? Train to peak at the end of the season when it matters most instead of at the beginning.

Effects that we gain from strength, speed, and agility training wear off as time goes on if these abilities aren’t being challenged. The Reversibility Principle dictates that athletes lose the beneficial effects of training when they stop working out. With that being said, it also means that detraining effects can be reversed when athletes resume training. It goes with the saying, “if you don’t use it, you lose it.” Training intensity is an extremely important driver of adaptation. Throughout the off season, training intensity changes to meet a certain goal. As the season approaches, intensity is generally high and more of an emphasis is placed on speed in movements. Since the quality of power is being highly developed at this point, the stars are lined up to allow your body to do everything better from having a quicker first step after a cut on the field to swinging a bat faster and harder. Qualities such as power, strength, speed and flexibility are called training residuals. The Residual Training Effect is the retention of changes in the body state and motor abilities after the cessation of training beyond a certain time period. After training is stopped, the effects of various fitness components decrease gradually.

Ask us a question, drop into a class or book a tour and find out what it's like to be part of #PACLIFE.